Welcome to your alma mater!

Your department is now over a hundread years old. The alumni have played a large role in the department maintaining its reputation as a top-level academic department. 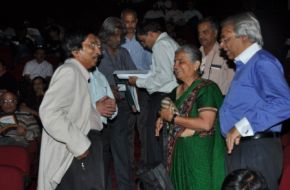 On the occassion of the centenary of the department during 2011, we have started an alumni database. You can register your details in the alumni database and also search for anyone in the database. We request you to please register if you have not already done so. This will enable us to communicate more effectively with our alumni in future.

EE Alumni can search their name in the alumni list by entering name or joining year or completion year.